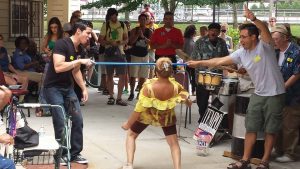 Melz Durston:  This weekend, Jamaica Plain will come alive with the sounds of local songwriters and the scents of citronella burning on the breeze. Inspired by Somerville’s annual community gathering, Mindy Fried and Marie Ghitman established JP Porchfest officially last summer, and this year, the duo sees the culmination of their hard work unfolding all over the neighborhood. Featured at Saturday’s all-day festival are more than 130 musicians playing across 72 porches, including Mark Lipman, Sugarcoma, Between Trees, the Isabel Stover Trio, and former Fuzzy member Chris Toppin and her band LOVE LOVE.

Vanyaland caught up with Fried about the behind the scenes work involved in setting up JP Porchfest, the evolution of her community, and her efforts to bring everyone together for the event. For the full list and schedule of performers, click here.

Melz Durston: Jamaica Plain has its own personality, when you compare it to downtown Boston. How did Porchfest evolve to fit in with what JP currently has on offer, for music-minded folks?
Mindy Fried: There are many neighborhoods throughout the city that have a personality and a life of their own. I have lived in Jamaica Plain for almost 35 years, and when I meet some native Bostonians, my lengthy tenure in the city doesn’t translate to actually being from here! That said, I have seen a transformation in Jamaica Plain over the years. Jamaica Plain, as long as I’ve lived here, has also been a welcoming destination for people in the LGBTQ community.

In the past, you have hosted Chris Toppin (Love Love, Fuzzy) and Mary Lorson (Madder Rose, Saint Low); do you have plans to create a mini festival taking place in just one venue in the future, featuring Boston musicians, or is the whole point of Porchfest, to feature different locations and in doing so, give people who are local to JP, the chance to perform?

Our focus is to create a decentralized festival, one in which the audience moves around from place to place. It’s almost like a backyard barbecue on steroids! We tried to cluster the porches so that the audience could stay within a fairly small radius, and be able to hear five or six bands or solo musicians within the four hour period of the event. This coming year we will expand the hours to six, and we are also expanding the event to other parts of the neighborhood. The whole point of Porchfest is to feature different locations and give local musicians an opportunity to perform.

Do you think that Boston/Cambridge/Somerville/Allston have a passionate undercurrent running throughout their neighborhoods — where musicians are always seeking ways to create?
Certainly, the other neighborhoods you mention, and many others throughout the area, have a lot of creative people looking for ways to connect. Through our experience with JP Porchfest, we found that musicians really welcomed the opportunity to be part of a community building experience. This year, we will have more bands, and we will also include circus arts, theater, dance, and spoken word.

Is there a harmonious collaboration to be found, between existing venues and separately organized events in JP and other neighborhoods that do not rely on established venues?
We are following our instincts as organizers and lovers of music, and are just beginning to make some really nice connections with other groups that are putting on music events. I think that over time, we will explore some of these connections further. But what distinguishes what we are doing from the more traditional performance venues is that we draw from the community — including professionals and aspiring musicians — who perform in the community, and they have an equal opportunity to be part of the event — it is not curated — whatever level of musicianship they have.

Have you noticed a difference yourself, in your home-city, over the years, with people becoming more insular and less likely to go out and enjoy a live show? Especially with online-focused interactions including live streaming of concerts such as Boston formed Concert Window?
That is an interesting question, Melz. As a sociologist, I think a lot about the issue of community and the extent to which people feel isolated and disengaged. In my own experience, I am finding that the people in my universe want even more opportunities for social connection. Every time I think that my street or my community is so unique, I discover that other communities around the country are creating opportunities for people to gather and connect. Consider the phenomenon of “meet ups”, where people use the Internet to find a group of people who share an interest in some sort of activity, but then get together — in person — for a particular event or gathering. One might point to this and say that it is borne out of the lack of community, but I think it speaks to the desire of community and the willingness of people to reach out to create it themselves. As to whether people are going to live shows, I’m really not sure. I know that I think twice about going to a live show these days because of the cost. Right now, there is a touring alternative chamber orchestra that has a storefront in Jamaica Plain called A Far Cry. Some of my friends and I provide housing for them when they are in Boston, in exchange for going to their concert. They’ll be playing at porchfest on Saturday.

In what ways do you hope that JP Porchfest will bring people out and together again?  I think Concert Window regularly ties in with live shows at Club Passim, which keeps this live element…
In order to have a successful event, we realize that we need to work throughout the year to deepen our relationships with people in the neighborhood. We are working closely with a variety of community organizations to reach into neighborhoods where we only had a small presence this past year, to broaden that reach. One of the staff people from a community organization we work with has excellent contacts in all of the Latino media outlets, so this will be tremendously helpful in bringing out this segment of the population. We are continuing to work organizations to ensure that people of all socioeconomic backgrounds are involved. We reflect on what a success the event was last year, even though it was just our first year. We believe this speaks to the hunger for community and the desire to create and consume art.

How much organizing and inspiration has the whole project taken and are there things you might do differently at future Porchfests?
Organizing Jamaica Plain Porchfest took an extraordinary amount of time and energy, but we loved it. In order to create an event that would go smoothly, we established relationships with the City of Boston arts administrators, the local police, the city’s neighborhood services, and the Office of Inspectional Services. We didn’t want to have any surprises undermine the success of the event. And then we discovered that in meeting with all of these folks, we were creating a community of support that not only helped us avoid problems, but also established the event as part of the City of Boston roster of cool things happening.

Any plans to take them outside of JP or to other cities, or is this a purely local project?
We believe that any community could create its own Porchfest. We have friends all over the country who want to do it. The main barriers are motivation and time. Marie, my co-organizer, has begun writing a simple ‘how to’ guide, and has had one meeting with a musician who would like to organize a porchfest in her community.

Would you bring former GRCB (Girls Rock Camp Boston) or LRCB (Ladies Rock Camp Boston) bands/acts into your program, in the future?
As you mentioned, LOVE LOVE played last year’s porchfest. Now that the event was a success, we would love to work more closely with Chris Toppin and GRCB and LRCB girls and women.

What was it that inspired you to start up Porchfest in the first place?
I am a closet singer and pianist, but definitely not ready for prime time. My inspiration came from a desire to build community through the power of music. Marie, my co-organizer, and I have been friends for many years, co-ran a childcare cooperative when our now adult kids were babies, and we welcomed the opportunity to work together. The experience of organizing JP porch fest was truly wonderful. There was a lot of laughing and inspiration in this experience.

What was the last gig you went to in the Boston area, and have you discovered new local music, through hosting Porchfest and through the people you have met?
The last gig I went to was a concert by Debo Band, which is headed up by Ethiopian-American musician, Danny Mekonnen. A couple of Debo off-shoots played JP Porchfest and they were amazing. So it was thrilling to hear them play in concert. Debo has gotten quite a bit of recognition, and we’re hoping that they’ll still honor us with their musical presence in our home-spun event!

JAMAICA PLAIN PORCHFEST :: Saturday, July 11 from noon to 6 p.m.
All-ages, free: Full schedule of performers can be found at jpporchfest.org